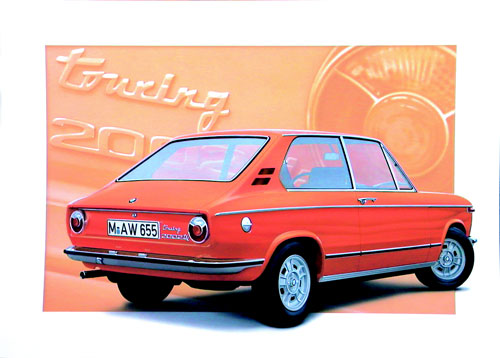 Back at the end of last year, I was contacted by Marsen Karlsson from BMW Headquarters in Munich. He indicated that he works with the BMW Magazine magazine, and that they were interested in including my Baur in the new IPad version of the magazine. He asked me to take some pictures, which my son Harry Jr. did, send them a brief story of the car, and, in addition, Marsen interviewed me via Skype.

Well, a few months have passed, and I did not remember about this until my son asked me last night about it. I don't have an IPad, but he does, so I asked him to check. Sure enough, there it was!!

It is on the 1/12 edition of BMW Magazine, and you can download it for free to your Ipad. My son took a few screen shots of part of the article, and here they are:

New Heart for the Baur

As I have mentioned before, the Baur's engine is tired, and smokes quite a bit, although it doesn't miss a beat. Well, I acquired a few weeks ago a used engine, which was previously on a friend's E30. He installed a newer M52 in his car and offered me the M20 at a good price.

The engine is essentially a 1988 2.7 Super ETA with 325i fuel injection and computer. I have done some research and apparently all I need is a cam with longer duration to make it a strong, torquey engine. Hopefully I will be able to have significantly higher power and torque than my car's current M20B20, at a reasonable cost. Plans are to install it some time during the Summer months, so I'll post here any progress.
Posted by Unknown at 8:24 AM No comments:

Although I have been a BMW fan and owner for over 30 years, I do like other cars. Here are some of them:

Volvo 122/Amazon (this is a quite rare convertible, but I love all body styles) Ferrari 250 GT Lusso Berlinetta (IMHO the most beautiful car ever) I hope you find them interesting. I'll post more of these sporadically.
Posted by Unknown at 9:40 AM No comments:

Email ThisBlogThis!Share to TwitterShare to FacebookShare to Pinterest
Labels: 320i, BMW, E21, racing

A few months ago my friend Ivan Pelegrina shared some photos of BMW's racing in our island back in the 70's, participating both in road races and in rallys.

The rest of Ivan's cool pics can be seen here:

Cool stuff!
Posted by Unknown at 3:02 PM No comments:

Made a trip to Atlanta from 11/8/11 to 11/15/11 for some R & R and, unfortunately, to make a decision about the future of the 2000tii touring project. I don't foresee any possibilities of re-starting the project in the near future, and storage charges continue to put a dent in my budget. I expand about this later, so, for now, I'll write about the fun part of the trip, which was the meet and drive with the Atlanta 2002 Owners Club.

We gathered at Carma Motorsports' second facility, which they recently started operations out of, and Jeff Chang greeted us with muffins and coffee. There were several interesting non-BMW cars and motorcycles at the shop:

Turnout was pretty good, with many local '02's and other cool Bimmers attending:

My daughter Michelle's 635csi (my ride for the day)

After the meet at the shop, a group of us, driving four 2002's plus me in the 635, had a great drive up mountain roads all the way to Brasstown Bald, the highest point in the state of Georgia.

Part of the cars that made it up the mountain

The view from the top

This is the group that made the drive

Posted by Unknown at 8:32 AM No comments:

The Arrival of Bronzit II

The car is an automatic 4 door, and, although it needs some work, the price was good ($1300). The idea is to fix it up so it can be used on a regular basis by the missus.

Here are a few pics taken at the seller's home with my phone:

Promote Your Page Too